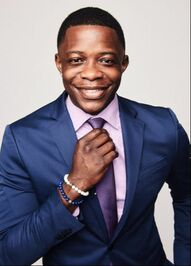 ​James Shaw, Jr. made headlines and became a national hero after bravely disarming a gunman at a Waffle House restaurant in Antioch, Tennessee, on April 22, 2018. The 29-year-old Nashville native – now known as the “Waffle House Hero” for saving lives due to his actions – is a proud alum of Tennessee State University, where he studied Electrical Engineering.

This self- proclaimed regular guy is anything but ordinary.

Having faced one of the most traumatic situations one could imagine, and one that he would rather forget, Shaw is clear that the Waffle House encounter will stick with him forever. However, determined to turn the tragic course of events into a stepping stone, Shaw is committed to using his voice and personal experience to make a major impact in his community. He hosts national meetings and galvanizes global thought leaders to share his community and humanitarian plan to systemically address policy change and increase efforts to make gun control/violence, mental illness, and the impact of post-traumatic stress disorder a national priority.

Shaw’s heart of giving back is at the cornerstone of everything he does. He established ‘The James Shaw Jr. Foundation’ in August 2018 and has raised more than $240,000 to assist the victims of the Waffle House incident.

The hero has been recognized on CNN, the Ellen DeGeneres Show, the Steve Harvey Show, Today Show, and many other national television programs. During the 2018 MTV Movie and Television Awards, “Black Panther” star Chadwick Boseman surprised Shaw by calling him on stage and presenting him with the Best Hero award the actor had just won. Additionally, John Legend paid tribute to Shaw and others presenting them with the first-ever BET Humanitarian Award at the 2018 BET Awards. Shaw has also received the prestigious ‘Muhammad Ali Humanitarian Award’ in Ali’s hometown, Louisville, Kentucky.

In addition to his studies at Tennessee State University, Shaw attended Brightwood College and is now a skilled Electrical Technician. He is the proud father of a beautiful 4-year-old daughter.
Copyright 2022 TSUAA Detroit Area Chapter